Blodget accurately uses the word "greedy" and "short term" to describe how U.S. corporations are acting -- by cutting back staff, freezing most workers' wages, and buying back stock.

Yet there's another way to look at these trends: from an orthodox business perspective. Indeed, in my finance course in business school, we were taught that corporate decisions such as buying back shares and issuing big dividends may be popular among investors; yet such actions must also be eyed skeptically by long-term investors, since they are a signal that the corporation can currently find no better use of its profit, such as R&D or capital investment.

Now jump to the "job creators" myth, and you'll understand why this is relevant: every time Wall Street cheers these short-term gains in stock price, U.S. workers are losing out again, because either somebody's not getting hired or somebody's not getting a raise. And this means less consumption and economic activity (about 70 percent of U.S. GDP).

And this gets back to the idea of depressed aggregate demand, and why the "job creators" myth is bullshit, because the capitalists (people with money) and the corporate owners (shareholders) and officers, when acting rationally in a system where their customers don't have as much money as they once did to buy their products, stop investing and producing as much, because this seems like the sensible thing to do. And they all do this at once. They are prisoners in the same system that wage-earners and consumers inhabit; they're not divorced from it, at least not in the long term.

So this idea that job creators, if government would only get out of their way and/or cut their taxes, would behave much differently than they are now, is totally bogus and irrational, because although they are at the top, they are not the commanders of the system, nor do they stand apart from it.

In fact, as Paul Krugman pointed out back in 2010, and just about every business survey since then has supported, lack of demand (sluggish sales) is the key business problem, not taxes or regulation or general "uncertainty."

Why Does The Economy Stink? Because America's Owners Are Greedier Now Than Ever Before
By Henry Blodget
August 19, 2014 | Business Insider 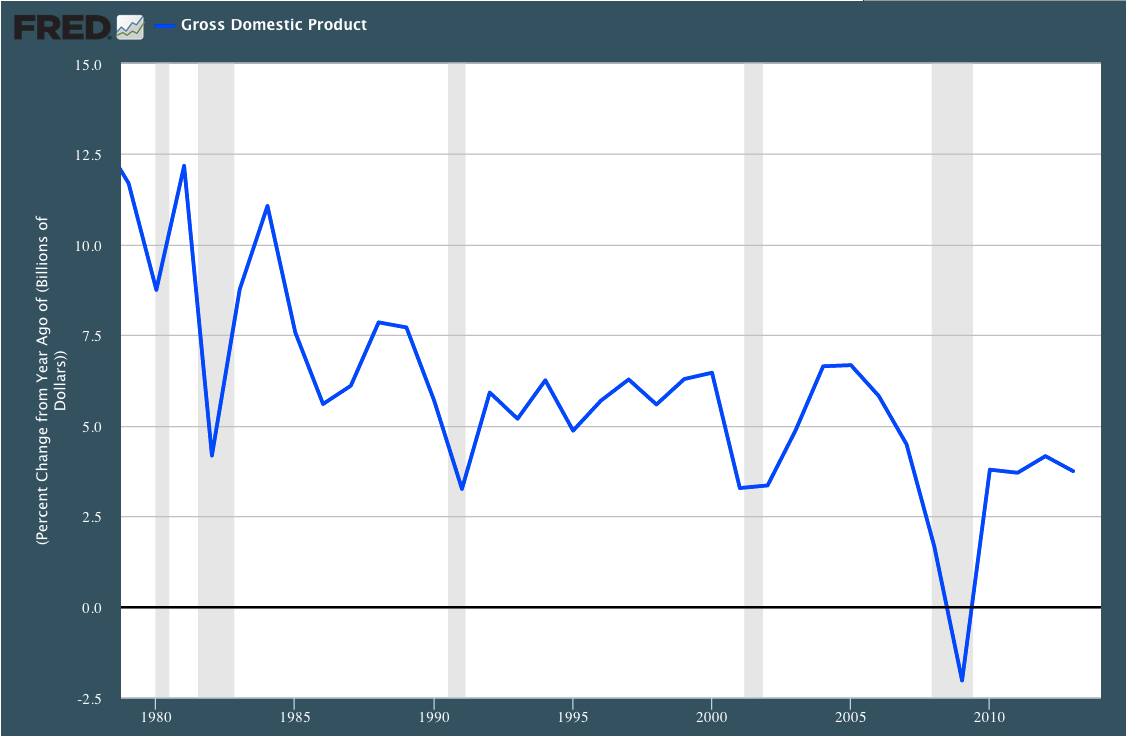 Why is growth so slow and weak?
One reason is that average American consumers, who account for the vast majority of the spending in the economy, are still strapped.
The reason average American consumers are still strapped, meanwhile, is that America's companies and company owners — the small group of Americans who own and control America's corporations — are hogging a record percentage of the country's wealth for themselves.
In the past five years, American corporations have boosted their profits and share prices by cutting costs (firing people) and buying back stock. As a result, unemployment remains high. And wage growth for the Americans who are lucky enough to be working has been pathetic — the slowest since World War II.
Meanwhile, America's corporations and their owners have never had it better. Corporate profits just hit another all-time high, both in absolute dollars and as a percent of the economy. And U.S. stocks are at record highs. 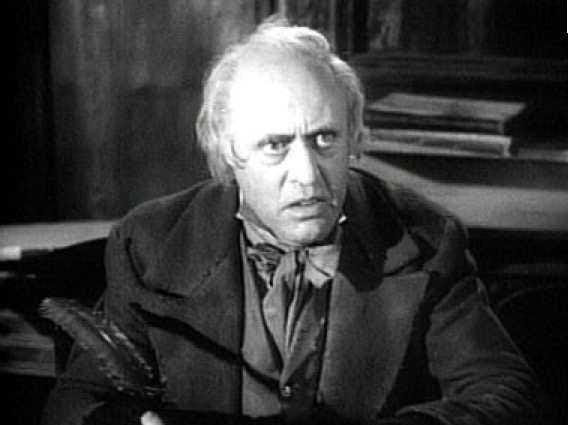 Even Scrooge would be appalled.
Many people seem confused by this juxtaposition. If corporations and shareholders are doing so well, why is the economy so crappy?

The answer is that one company's wages are other companies' revenues. Americans save almost nothing, so every dollar we earn in wages gets spent on products and services (including, in some cases, those of the companies we work for). The less that American companies pay their workers, the less American consumers have to spend. And the less American consumers have to spend, the slower the economy grows.
This isn't a complex concept. We're all in this together. People make it complicated by casting it as a political issue and inflaming partisan tensions. But it has nothing to do with politics.
Importantly, it doesn't have to be this way.
There's no "law of capitalism" that says that companies have to pay their employees as little as possible. There's no law of capitalism that says companies have to "maximize short-term profits." That's just a story that America's owners made up to justify taking as much of the company's wealth as possible for themselves.
Ironically, this short-term greed on the part of America's owners is most likely reducing their long-term wealth: Companies can't grow profits by cutting costs forever, because their profits can't grow higher than their revenues. At some point, revenue growth needs to accelerate. But that won't happen until companies start sharing more of the wealth they create with the folks who create it — their employees.
Let's go to the charts ...
1) Corporate profit margins just hit another all-time high. Companies are making more per dollar of sales than they ever have before. (Some people are still blaming economic weakness on "too much regulation" and "too many taxes." That's crap. Maybe little companies are getting smothered by regulation and taxes, but big ones certainly aren't. What they're suffering from is a myopic obsession with short-term profits at the expense of long-term value creation.) 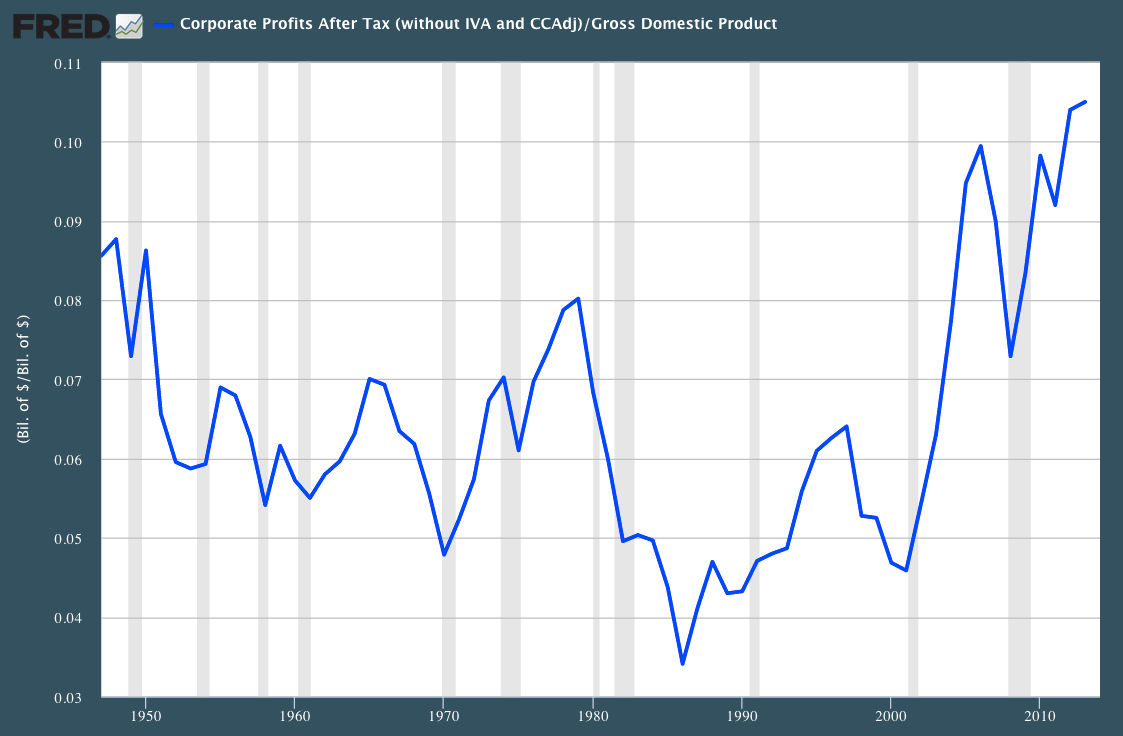 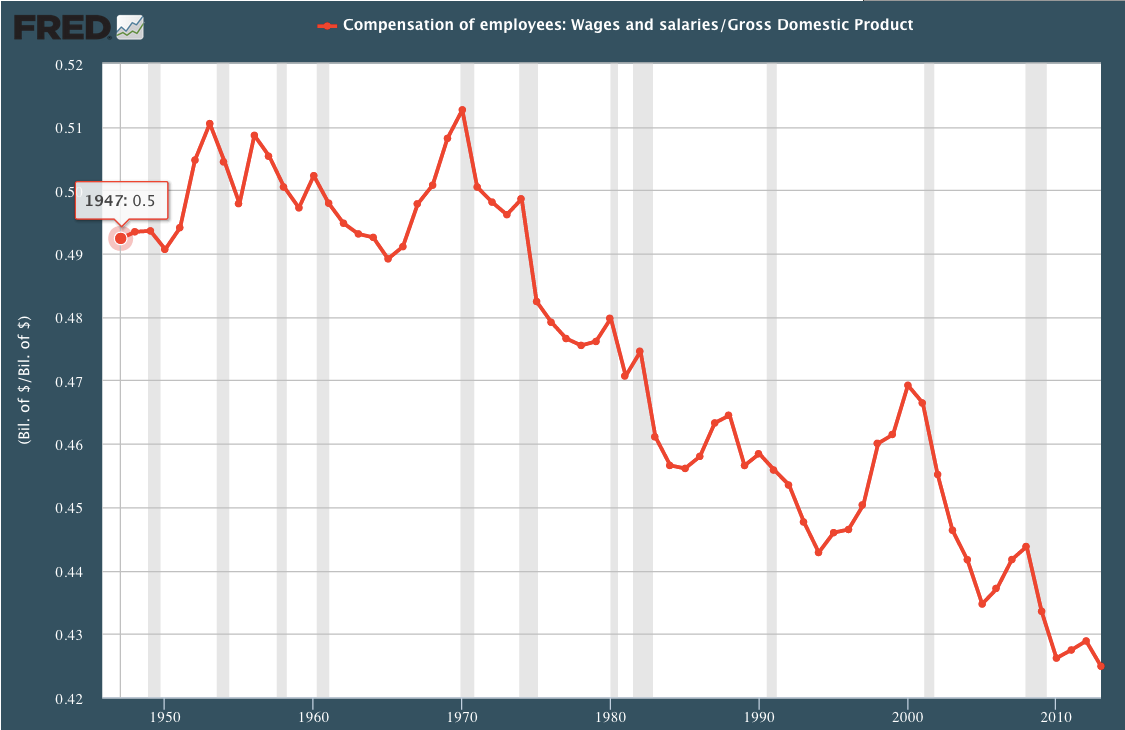 Business Insider, St. Louis Fed
Wages as a percent of the economy.
In short, our obsession with "maximizing profits" is creating a country of a few million overlords and 300+ million serfs.

ABOUT MOI, or, LIBERAL'S CREED

Jay Tell
I am a FAR-LEFT ULTRA-LIBERAL (is there any other kind?) who wants the IRS to steal your money and give it to lazy brown-skinned people who speak gibberish, hate work and wipe their asses with American flags. I believe that a search for real values begins in Hollywood and ends in San Francisco. If you need to see a doctor for a gushing wound, I believe that you should be put on a government waiting list until all the illegals have been given free medical care. I don't believe in God but I do believe in Obama, the true Messiah. I believe that guns belong only in the hands of jack-booted ATF thugs. I am a card-carrying member of the Blame America First Crowd. I believe that instead of reciting the Pledge, public school students should be forced by unionized teachers to don berets, sniff artisanal cheese, and shout "Vive la France!" And I believe in the day when unmarked UN-INTERPOL helicopters will swoop into Washington to impose One World Gay Socialist Government. Swarms of black choppers (with their payload of cold-blooded Belgian shock troops) will darken our skies as soon as single-payer health care is adopted, but shhh!!!, don't give away their cue! Amen.